What if Pres. Trump Pisses off the Christian Right?

Suppose President Donald J. Trump turns out to be the most pro-gay president from the Republican Party, EVAH.

Will the Christian Right, who have their own brand of identity politics, turn on him? You betcha!

And from that, here's a plausible South Park illustration of a Christian Right demonstration at the White House:

A YUGE mob of Christian rightists picket the White House, surrounding it on all four sides, blocking the ttraffic on four streets. They bear signs that bear the messages, "SHAME!", "TRUMP, RESIGN!", "F*****, GO PLAY WITH YOUR BOYFRIEND, PUTIN!" [I'm asterisking the last five letters of this F-word], and "QUEERLOVER!"

They are also chanting naughty little ditties such as the one after this image below, patterned after a taunting children's rhyme: 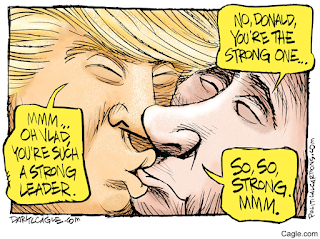 "PUTIN AND TRUMP, SITTIN' IN A TREE!
"K-I-S-S-I-N-G!
"FIRST COMES LOVE, THEN COMES MARRIAGE.
"THEN COMES THE BABY-- IN THE BAY-BEE CARRIAGE!"

Then shots ring out from inside the White House, and the mob hears it, turning towards the Executive Mansion expectantly.

Cut to inside the oval office. President Trump is lying on the floor and only his feet are showing; meanwhile Mike Pence, who is holding the smoking gun, hands it over to Big Gay Al, who throws up his hands to avoid incrimination.

Cut to station identification, which means a train of nine inane commercials.*