Bush and the Rapture.

I found an illustration of the last seconds on Earth prior to the Rapture, at the site Democratic Underground. It depicts Bush with a whole bunch o' Christians on a hillside awaiting the rapture that is just about to happen. Below, World War III rages. Of course, it's just LIKE Bush to disappear whenever disasters and catastrophes happen. Remamber 9/11? Remember Katrina? Remember when the economic meltdown first reached critical mass last September and Paulson -- not Bush -- sent a page-and-a-half piece of proposed legislation to Congress?


Well, here is the Rapture! 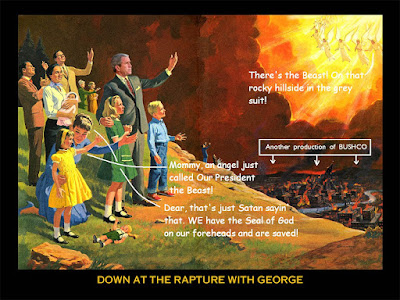 Sheila Bair announded the other day that the FDIC may borrow from the banks in order to meet its Deposit Insurance payout obligations that are expected to come down the pike. (No, not the Mass. Pike.) ;-)

Even as the FDIC is scrambling to find ways to replenish the practically empty Deposit Insurance Fund, one of its options, namely borrowing from the Treasury, may be a non-starter due to the eggregious monetization by its counterparty, the Federal Reserve, as both run up against the Federal debt ceiling. According
to Bloomberg:

"Any new government borrowing brings the outstanding U.S. government debt closer to the $12.1 trillion limit. Tapping the FDIC’s line of credit or borrowing through the Federal Financing Bank or from private banks also would have implications for the debt limit, Treasury spokesman Andrew Williams said in an interview."

The FDIC board is set to meet next week to decide how to refill funds
depleted by 94 bank failures this year. The options include new assessments on
banks, tapping a $100 billion line of credit with the Treasury Department, or borrowing money from banks or debt markets.

People, I can't begin to tell you how seriously whacked this is! The FDIC borrows from banks to fulfill its deposit insurance obligations and they'll repay the banks by assessing... the same banks! The FDIC and the banking "system" would become like Ourobouros, eating its own tail!

And suppose there's a bank run, like on Citigroup, or on Bank of America? Then all the big banks are in danger of collapsing! And who would be paying out to make the depositors whole to a certain degree? Why, the FDIC!!! And where would the FDIC get the money to bail out the depositors at these banks? Why the big banks themselves!!!!! O -- Ourobouros will be munching way, way up its tail! Once it reaches its own anus... well, you know what'll happen next.
Posted by Ed-M at 5:10 PM No comments: