My condolences to the slain, the injured, their relations, the other sufferers, and the people of Boston and eastern Massachusetts.

I'm not going to say much, but someone may have found the culprit. I think the man photographed will definitely be brought in for questioning, because the straps on his handbag are a perfect match for the discovered fragment of the exploded knapsack. 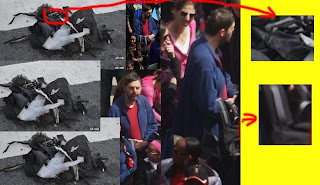 Then again maybe not. In the photo posted in post #2799 of this thread at www.mainboard.com, it looks like he still has the rucksack.

UPDATE APRIL 19th: The FBI have determined their chief suspects, who remain unidentified at this time. They were videoed turning the corner in front of Whiskey's at Goucester and Boylston Streets. They appeared to be calm and collected, which means they may have had some kind of training. This does NOT mean this was an inside job!
Posted by Ed-M at 10:18 AM No comments: