That's right, fire them. Then have your new Attorney General issue warrants for their arrest. For treason. Their policies of continuing the bailouts of the banks can only give aid and comfort to Russia, China and the Arab countries, all of who hate us.

Dear Mr. President, With All Due Respect...

Dear Mr. President, I read your New Era $3.6 Trillion Budget Proposal. I also listened to your
speech Tuesday night. You made a great campaign speech. However, the campaign is over. You won. And the reason you won is you offered hope as well as a promise
of change.

With all due respect Mr. President, Tim Geithner and Ben Bernanke are
offering the same policies as President Bush and Secretary Paulson. Those
policies are to bail out banks regardless of cost to taxpayers. Mr. President,
it's hard enough to overlook Geithner's tax indiscretions. Mr. President, it is
harder still. if not impossible, to ignore the fact that neither Geithner nor
Bernanke saw this coming. [Ed-M: but they knew it's been here since the first collapse of an old institution last MArch: Bear Stearns.] Yet amazingly they are both cock sure of the solution. Even more amazing is the fact that solution changes every day.

With all due respect Mr. President, Geithner and Bernanke are a huge part
of the problem, and no part of the solution and the sooner you realize that the
better off this nation will be.

With all due respect Mr. President, it is impossible to spend one's way out
of a problem, when the problem is reckless spending.

Chart is self-explanatory. Rumour has it that the street is not confident that this gnomes' lair will be saved before it collapses completely into insolvency.
Posted by Ed-M at 3:13 PM No comments:

They Don't Call It Totalitarianism for Nothin,

Karl Marx was an annoying man with some brilliant thoughts, whose work was like a football that Vladimir Lenin ran with. If his words prove correct, and the first few tenets seem right on the mark, then what follows in the Untied States will be anything but continued freedom. Calling it socialism might be a stretch. He wrote in "Das Kapital" the words: "Owners of capital will stimulate the working class to buy more and more expensive goods, houses and technology, pushing them to take on more and more expensive debt, until their debt becomes unbearable. The unpaid debt will lead to the bankruptcy of all banks, which will have to be nationalized, and the State will have to take the road which will eventually lead to communism."

Unfortunately, everywhere where the Communists tried to implement Communism, it ended up as pure fascism. Really.
Posted by Ed-M at 3:03 PM No comments:

Coming: Death to Bank of America and Citigroup

The stocks of bank of America and Citigroup have collapsed to below $5.00 a share - they are both penny stocks!

Charting Stocks Gone In 60 Days: Citi and Bank of America Won't Live to See May

Bank of America and Citigroup won’t live to see May. The two banks will be nationalized in the coming weeks, and we think that the announcement can come as
soon as tomorrow evening (Friday evenings are when major bank announcements and failures occur).


The US government has already committed half a trillion dollars to these two firms which is more than 10 times the amount it would cost to buy and control both companies. The market doesn’t believe that $500 billion is enough to save these companies.

Today both banks made fresh new lows with Citi closing at $2.51 and Bank of America closing at $3.93. The 1 year charts below show the short term price movements. You should understand that when a bank stock’s chart looks like
this, even a HEALTHY bank would be in trouble. Nobody wants their deposits tied
up in a company that trades at $2. The outflows of deposits from Bank of America
and Citi must be catastrophic.

And here are their stock price charts! 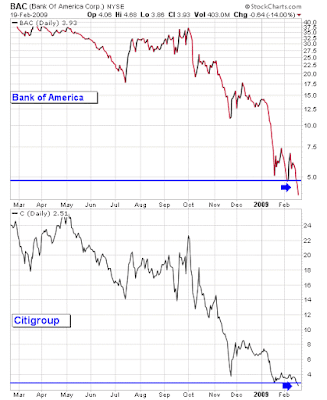 The US Gov't will need a lot more than the $500Bn already spent to bail out these banks. Don't count on any bailout for any banks to get through Congress this time -- both Dems and Repubs are majorly pissed off at the banking gnomes who took their year-end bonuses out of the first TARP. When Obama and Geither go to Captiol Hill and tell them that the new TARP is must-pass, the Repubs plus some Dems will shoot it down, probably by filibuster!

I gots two credit cards from Bank of America, both with zero balance. When it goes under, I am sure those cards will be useless!!!!!