The actions of Treasury Sec. Hank Paulson demonstrates the powers "given" to him by the Bailout Bill, HB 1422 (do I have that right?). Particularly given the ultimatum he gave nine banksters a couple of weeks ago: "We WILL bail you guys out and you can't say no for an answer!," gives a lot of people pause as to what dictatorial powers this guy seems to "have" now. (Assuming a properly staffed Supreme Court that will interpret the Constitution, not legislate from the bench's right wing or its left, rules on the Bailout Bill)


She has a picture here, http://elainemeinelsupkis.typepad.com/money_matters/2008/10/elaine-meine-11.html of Nicolas Sarkozy with her own comments. So I have a similar picture now, given that Paulson has been given to raiding the Cave of Wealth and Death by issuing Treasuries against our future wealth so he can bailout and partially nationalize various banks. 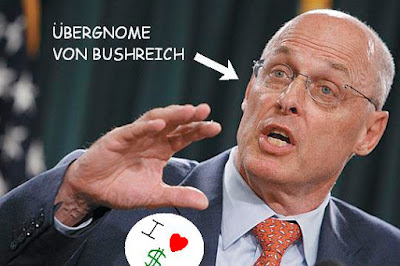