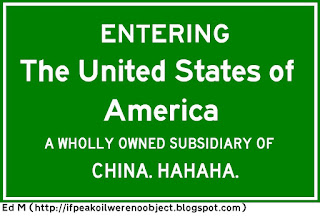 This is a curious sign. Actually it's more black humor than anything else, ln light of China has over a trillion US$ of our debt. Plus a Foreign Exchange hoard of over two trillion US$. The scary part it, it might become reality someday! :-O Aye yi yi!!!
And who or what inspired me to make this sign? Elaine Meinel Supkis ( http://elainemeinelsupkis.typepad.com/), blogger on many subjects, with her numerous blogs that informs her readers that WE are BANKRUPT and that China, Russia, and other countries that don't particularly like us are the ones holding our foreign trade debt and a big chunk of our other debts!

Drop in Crude Supplies for Major Western Oil Cos

Looks like those of us in the West will have to get more and more of our oil from countries that are not exactly friendly to us... like Russia!

Oil production has begun falling at all of the major Western oil companies, and they are finding it harder than ever to find new prospects even though they are awash in profits and eager to expand.

Part of the reason is political. From the Caspian Sea to South America, Western oil companies are being squeezed out of resource-rich provinces. They are being forced to renegotiate contracts on less-favorable terms and are fighting losing battles with assertive state-owned oil companies.

And much of their production is in mature regions that are declining, like the North Sea.

The reality, experts say, is that the oil giants that once dominated the global market have lost much of their influence — and with it, their ability to increase supplies.

“This is an industry in crisis,” said Amy Myers Jaffe, the associate director of Rice University’s energy program in Houston. “It’s a crisis of leadership, a crisis of strategy and a crisis of what the future looks like for the supermajors,” a term often applied to the biggest oil companies. “They are like a deer caught in headlights. They know they have to move, but they can’t decide where to go.”

And the oil companies are at their wit's end, due in no small part to the quieting down of war talk against Iran and the cracking down on speculators, both of which have pushed the price of oil down.
Posted by Ed-M at 10:12 AM No comments:

China's coming-out party is not yet over and already the Dragon has changed direction in a way we least expect. To the detriment of BushCo, naturally. HAHAHA.

Oh my God!!! BushCo sent our troops into Iraq mainly to get at the oil *cheap* for the US oil companies. Now China is getting some of it instead. And if they outbid all others on ALL the Iraqi oil contracts??? Oh, that'll be rich.
Posted by Ed-M at 3:09 PM No comments:

New Route Markers for US Routes

The following eight are for US Highways that are *not* of Interstate Quality and possess a distinctly 50s retro look with the banner inside the colored shield. The color coding would be for different types of routes, like Cody Goodman's signs at The Great International Highway Makeover and AJ Froggie's idea for bannered routes at Magnolia Meanderings. The first sign would be for the mainlines. It is red, white and blue with either "United States" for the banner, as shown, or with "US" alternatlvely. 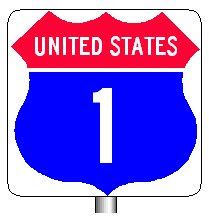 This next would be for the posted Alternate Routes; the numeral field and the banner switch colors. 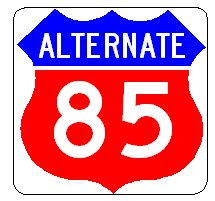 This one would be for the Truck Routes, black for heavy trucking. 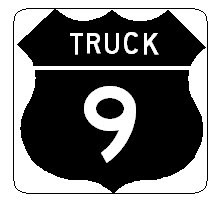 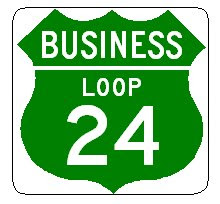 Now this one with the "TOLL" banner could be for tolled sections of mainlines that are not otherwise interstate quality. It could also be used for tollways if it is decided on a national basis not to use the two US route markers shown in the pervious post for the US freeways and tollways. 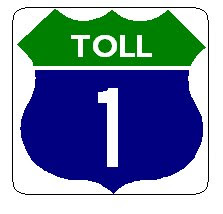 These last three are the pleasure-oriented travel routes, brown on white. The first of these three would be for the Historic Routes. The last two would be for Scenic Routes. An' a tip' o' the ol' hat to RVD of The Great International Highway Makeover for the last one -- his US Highways 1 to 830 webpage with its Route A1A idea inspired that last one! 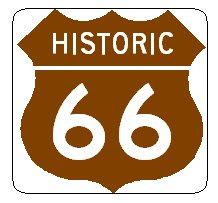 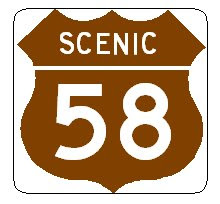 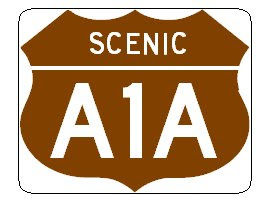 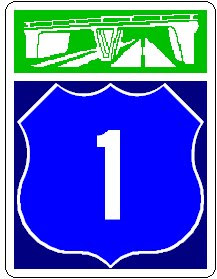 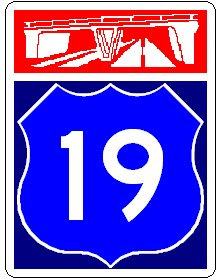 These two are intended for US Highways with Interstate characteristics, i.e., fully-controlled access with breakdown lanes, where possible. These two have the "modern" US Highway Sign shape outlined blue shield with with contrasting blue surround and differently-colored banner representing a fully controlled access expressway -- same as for Quebec's Autoroutes. The one with the red banner would be for freeways and the other would be for tollways.

Why "Fin des Voies Rapides?" Curious, but simple. It all goes back to a trip I took with my partner, Andrew, in September, 1993. We were living in Boston at the time and we decided at the drop of a hat to visit Montreal. So we drove up I-93 from Boston, to I-89, then in to Montreal via various Quebec Autoroutes (expressways aka freeways). As we came in to the city on the Autoroute Bonaventure (the A-10 expressway) I noticed a huge overhead sign bearing the message above. 1500 feet ahead, the expressway came to an end, dumping all its traffic onto the city streets.

So what does this mean for the implication of peak oil? Peak oil means that once the maximum production has been reached, the amount of oil available would gradually decline. The effect on the US would be intensified, since the oil EXPORTERS would be consuming MORE of their DECLINING production. So in short, peak oil means the approaching end of our "life in the fast lane." The French version would be IMO, "fin des voies rapides." :)
Posted by Ed-M at 10:33 AM No comments:

Email ThisBlogThis!Share to TwitterShare to FacebookShare to Pinterest
Labels: General

A Word on Interstate Numbers and Signs

There are two interstates who stick out like sore thumbs ‘coz their numbers are out of sequence: I-238 in the San Francisco Bay Area and I-99 in central Pennsylvania. The former was probably just as well since locals have always known it as the 238. The latter, which used to be US-220 and still is, is the result of GOP political corruption and pigheadedness! (I have also heard that certain interests in Penna. wanted I-67 for the next freeway over... so that area would have two out-of place Interstates: one of which would be more suited for Maryland’s Eastern Shore and the Carolina Low Country or Mass. State Road 3 to Cape Cod, and the other one would be more suited running north from Indianapolis into Michigan!)

And there are rumors afoot that the Feds want to replace the familiar shield with a square to cut down on wastage of resources. If that is true, I believe they would pick a truely ugly design like this:

I would rather they choose a better, more colorful design. Here are two examples:

Defnitely easy to understand and a classier design than the hideous shield-in-a-square design that would be similar to the one the FHWA mandated for our US Highways’ signs, including Florida, which used to have a wonderful kaleidescopic array of such signs!

And with my design, something could be done about the two obnoxiusly out-of-place road numbers!

Topics I will post on will include (but may be more!):