Well more methane is seeping out of the ocean floor not only in the Arctic but also in the Atlantic now, off the USA East Coast.

Greenhouse gas concentrations spike — heating the atmosphere and the deep ocean after a period of glaciation during which vast stores of carbon accumulated. Massive volumes of this carbon lay dormant — trapped in frozen ground and in clathrates on the sea bed. As the ocean and airs warm, these carbon stores release causing a massive spike of additional greenhouse gasses to hit the atmosphere and setting off ever-more-rampant heating. The cycle continues until much of these carbon stores out-gas, pushing the Earth into a hothouse state.
Sound chillingly familiar?

What I’ve just described is the process that most scientists believe occurred during the worst mass extinction event in the geological past — the Permian Extinction. A hothouse event that killed 95% of life in the oceans and 70% of life on land. And what humans are now doing to the Earth’s airs and waters through CO2 and related greenhouse gas emissions may well be shockingly similar.


Unfortunately, the vast carbon store in the Arctic is not the only potential source of heating feedback carbon release. For around the world, upon and beneath the ocean sea bed, billions of tons of methane lay stored in clathrate structures. These stores are separate from the large carbon deposits in the Arctic. But they are no less dangerous.

In 2012, Nature issued a study that found a store of clathrates composing billions of tons of methane was now destabilizing off the US East Coast. The study predicted large-scale releases in the multi-gigaton range from the southern region of the East Coast methane clathrate store due both to changes in the Gulf Stream circulation and to warming bottom waters — both impacts set off by human-caused climate change. The study was uncertain how fast such a release could occur, but noted that the eventual release was likely due to wide-scale clathrate degradation associated with ocean bottom warming.

And the amount of methane in our atmosphere is increasing faster now... last year it was about 1825 ppb; now it's around 1836 ppb. Note the rate of increase was lower prior to 2011.

This means the amount of methane that is in the atmosphere is increasing and could take off like a rocket - creating a hockey stick graph! And everyone knows, or should know, that hockey stick graphs charting realtime phenomenon, like a real estate bubble, a population explosion, etc., are very, very dangerous! It indicates that things will soon go haywire. And we can't afford to let that happen to our global climate. Earth is the only home we have.

Here's something interesting! The City is building a new bikepath along the right-of-way of the old railroad tracks which used to be the Carondelet Canal here in New Orleans. In the block bounded by Conti St, Jeff Davis Pkwy (Northbound), Lafitte St and Jeff Davis Pkwy (Southbound) is a junction of three bikeways: the Jeff Davis Bikeway, the Bayou St John Bikeway and the Lafitte Greenway. At the very junction itself they are building a miniature roundabout! 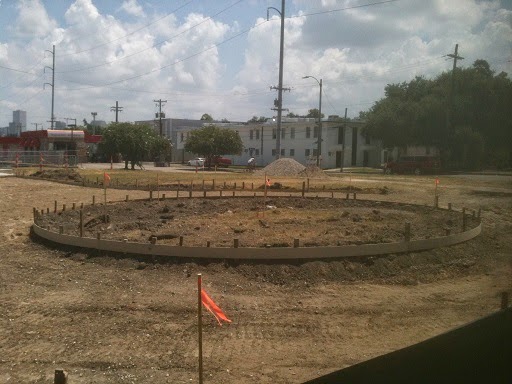 Was Jesus Even Crucified? Part 6d


WHEN Was Jesus Crucified?
Previous Parts:

The post, "Was Jesus Even Crucified? Part 6c" is complete and ready for your comments.

A new Part 6d discussing Tertullian's dating of the alleged crucifixion will be coming soon.
Posted by Ed-M at 1:49 PM No comments: