A New House in the Lot Across the Way. 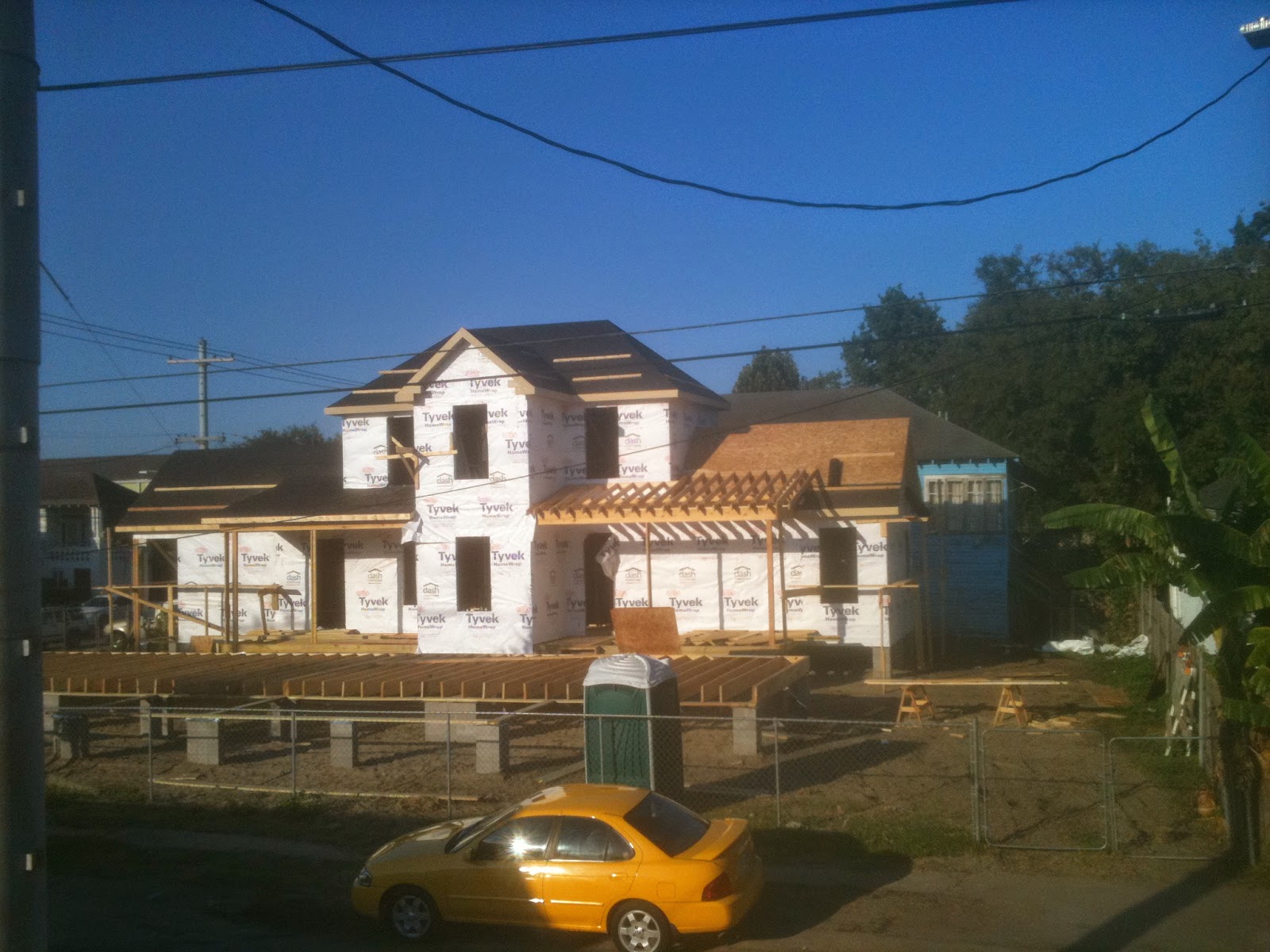 Photo taken October 26, 2014, early evening.
Since I took a photo of the lot across the way last, the new house arising in it has been topped out and sheathed. It is of the Victorian-style camelback type. The finishes appear they are going to be the builder's "standard" variety -- single-hung windows that pretend to be double-hung, box eaves, asphalt-tab shingles and hardyplank siding (at least it isn't vinyl siding!).
The houses are going to front on S Cortez Street.

Lot Across the Way -- a House Frame Goes up. 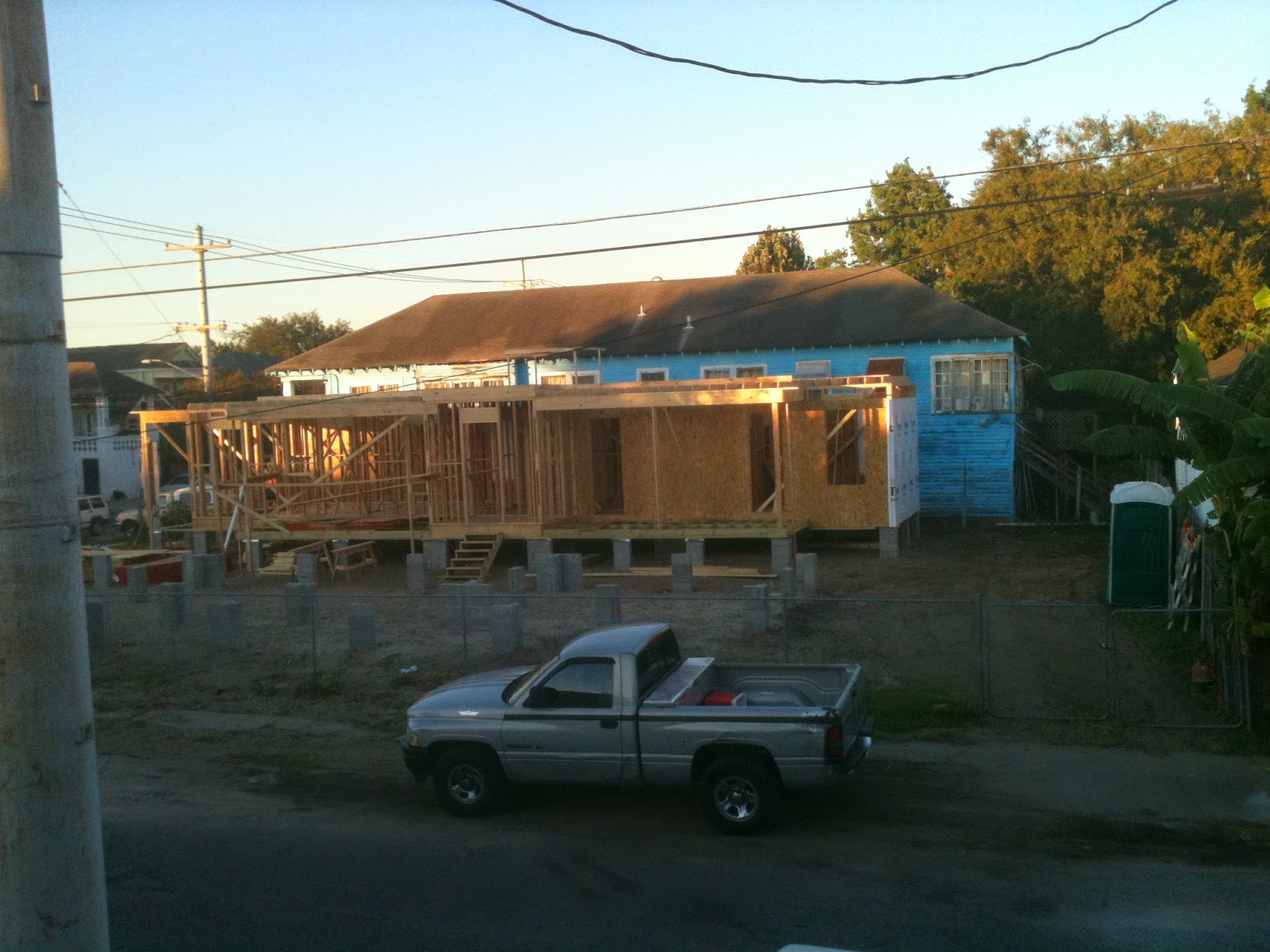 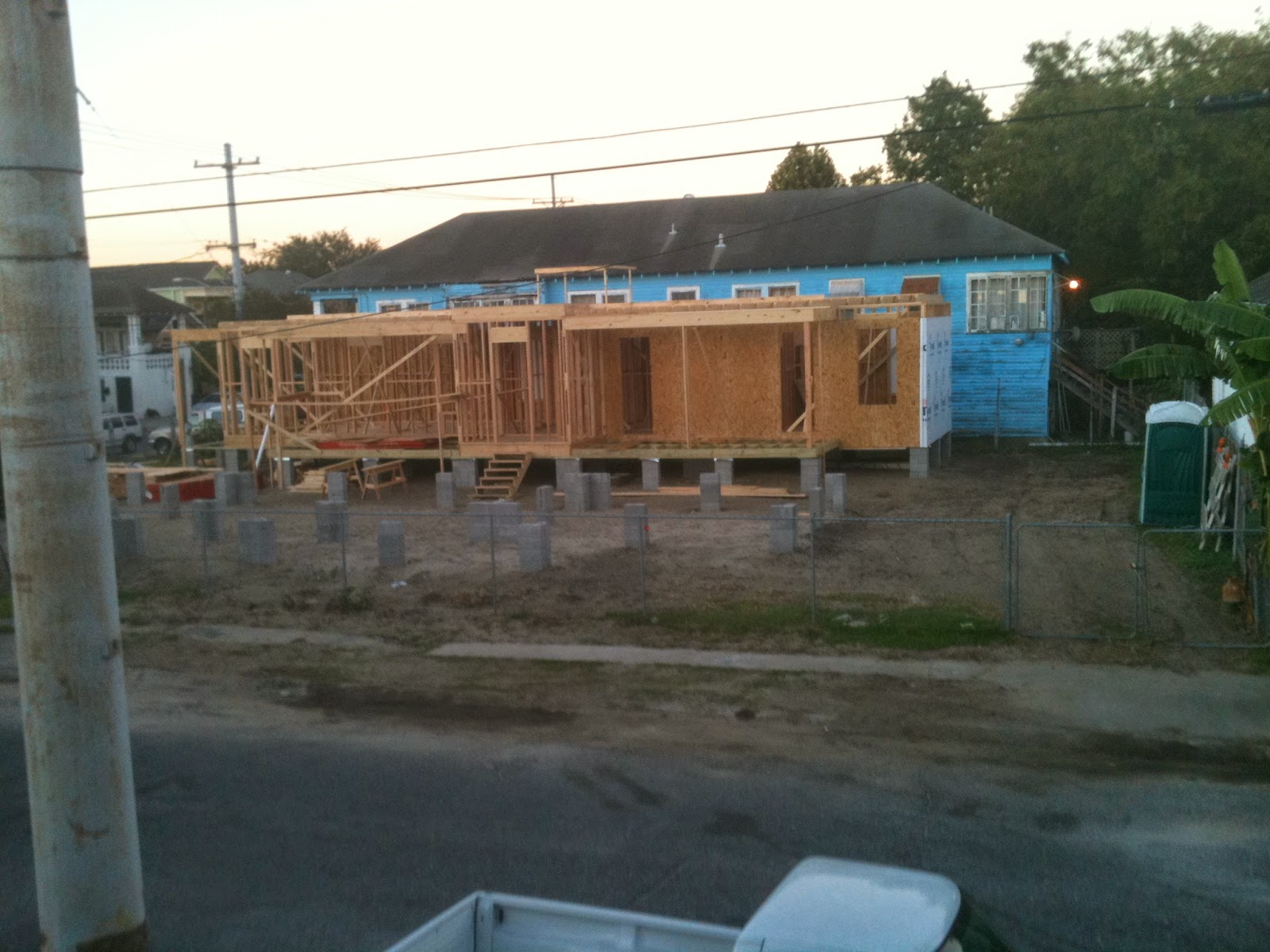 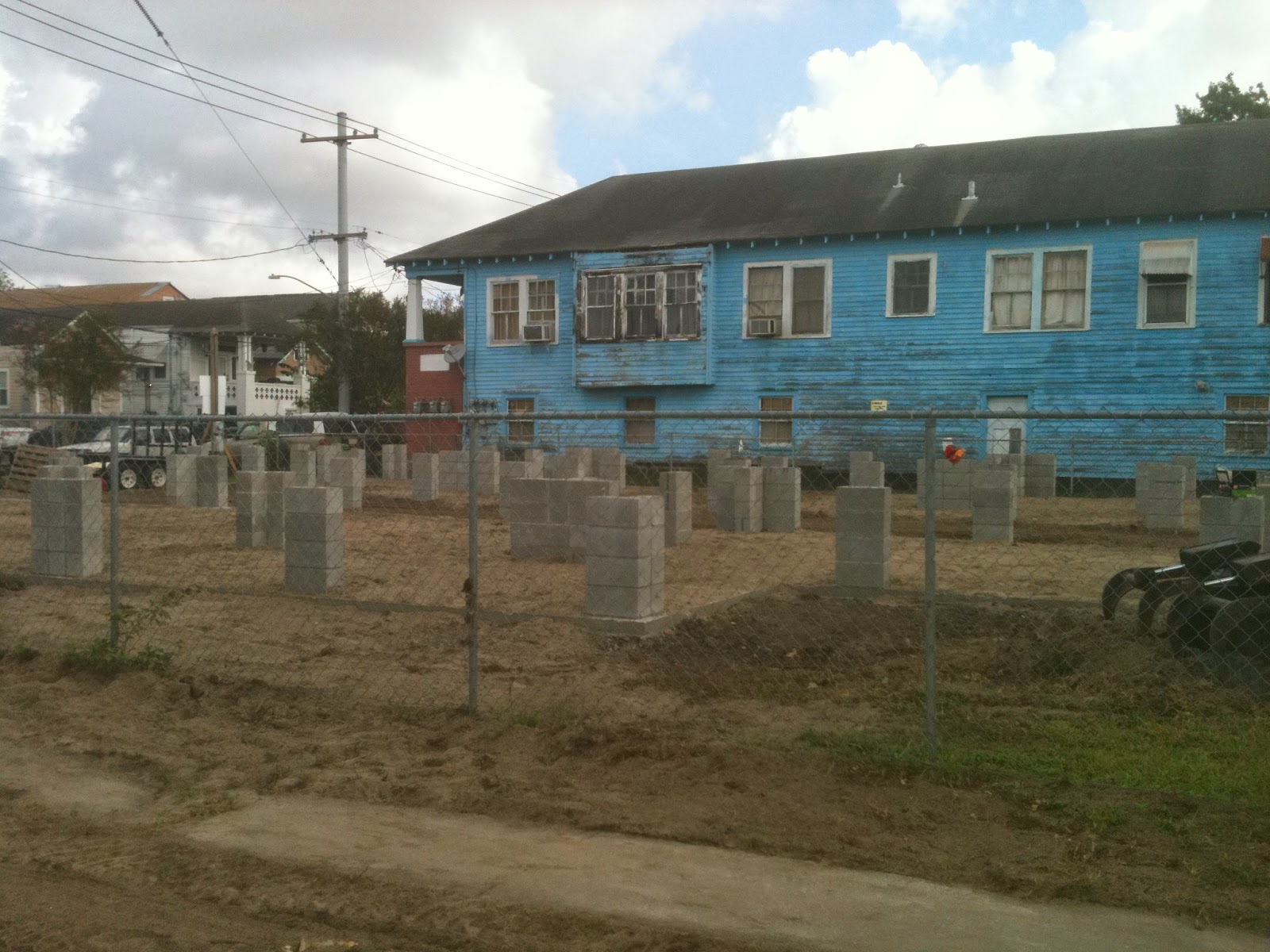 Photo taken October 10th.
The lot across the way has acquired concrete foundations and concrete cinderblock piers for two new houses. Before the piers went up, I thought these would be high-priced houses but they look like Habitat for Humanity house foundations.
And they could very well be! Because before the construction started, my partner remarked that he heard someone outside a hundred feet away, talking into a cell phone, with authority, that there are activists in this neighborhood who did not want housing in this area!﻿

4 Romulus, that he might perform his vow in the most acceptable manner to Jupiter, and withal make a pomp of it delightful to the eye of the city, cut down a tall oak which he saw growing in the camp, which he trimmed to the shape of a trophy, and fastened on it Acron's whole suit of armor disposed of in proper form; then he himself, girding his clothes about him, and crowning his head with a laurel garland, his hair gracefully flowing, 5 carried the trophy resting erect upon his right shoulder, and so marched on, singing songs of triumph, and his whole army following after, the citizens all receiving him with acclamations of joy and wonder. The procession of this day was the origin and model of all after triumphs.

Of course, I shouldn't have to remind you that the Greek for trophy is τρόπαιον, and the Latin, tropaeum.

And here is a fresco painting in Pompeii of Romulus carrying a tropaeum.


And here is a carved depiction of Jesus, carrying a tropaeum.  Which, of course, is a cross.  Note the close similarity between the two.

And at the end of the carrying of the Cross, or tropaeum, Jesus is nailed to it as a god. Just like the wax image of Julius Caesar.


Earlier I had posted on this blog an article demonstrating that Jesus' being led to Golgotha was based on none other than a typical Roman Triumph. Said dependence still stands.
.
Any questions, Christians?

Email ThisBlogThis!Share to TwitterShare to FacebookShare to Pinterest
Labels: Crucifixion, Romulus, The Romans DID NOT CRUCIFY., Triumph

After the defeat of Acron,king of the Caeninenses, Romulus, the founder of Rome, "cut down a monstrous oak that grew in the camp, hewed it into the shape of a trophy [διεμόρφωσεν ὥσπερ τρόπαιον], and fitted and fastened to it the armour of Acron, each piece in its due order." (Plutarch, Romulus 16, 4; Bernadotte Perrin translation (1924))

Where the Greek denotes:

This event occurred somewhere around 750 BCE.

Now what is the affixing of enemy armor to do with "crucifixion?" Simple. The shape of a trophy in ancient Roman times was nothing other than a cross. Observe: 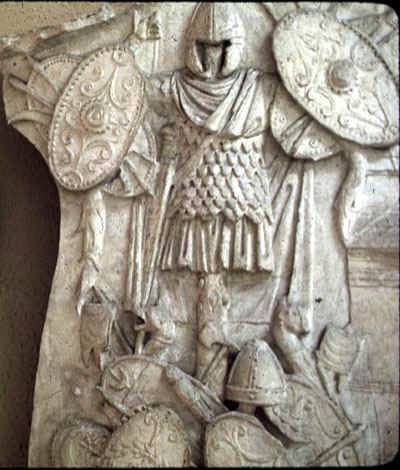 Here is a depiction of a tropaeum on Trajan's column.
Note well that it is shown in the shape of a cross and is dressed with enemy armor.
﻿ 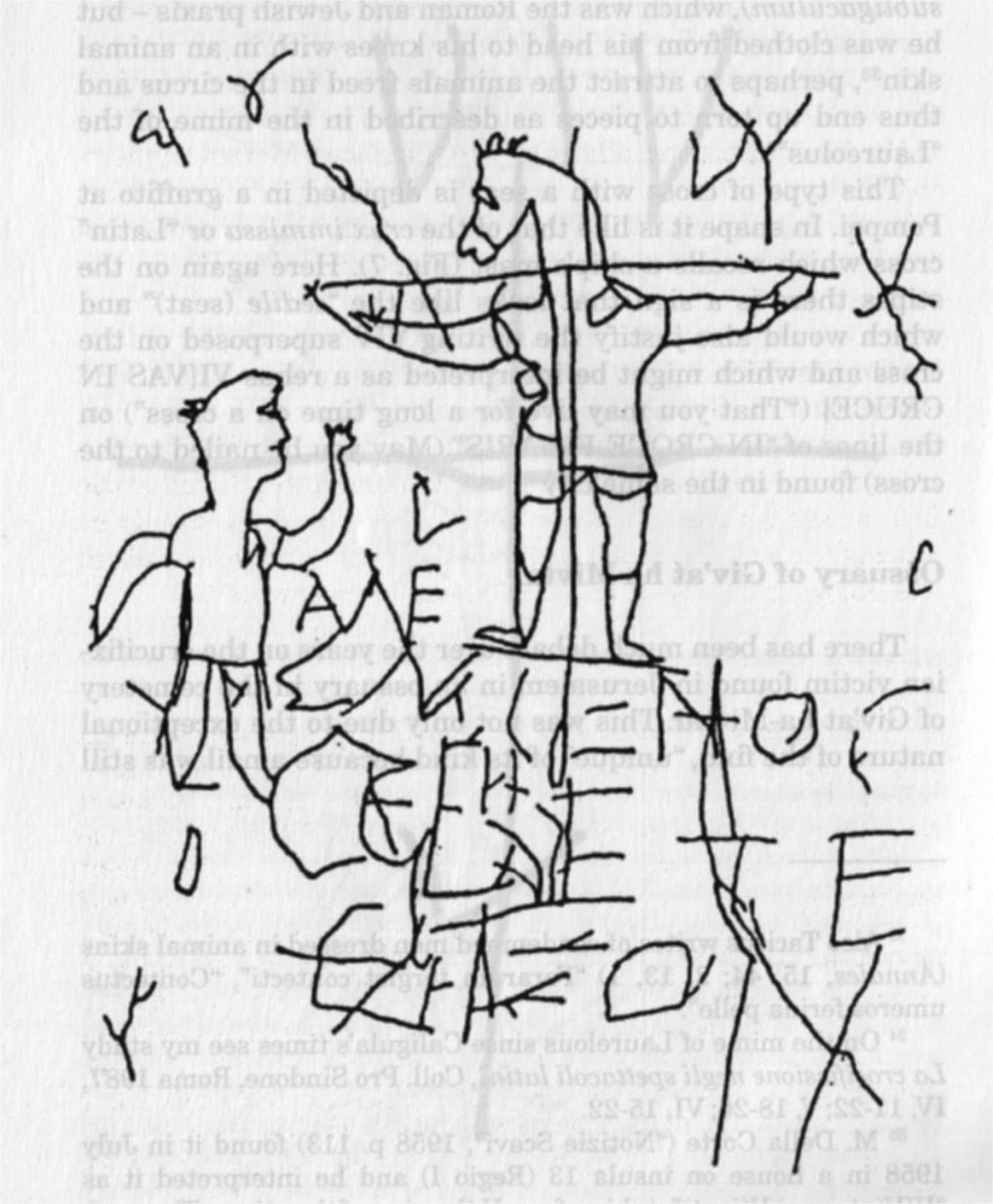 And here is Alexamenos' donkey-headed god, fastened to and suspended on a tropaeum.
This is the sort of thing that all Christian depictions of the Crucifiction are modeled on and what nearly all people including scholars think of when they hear the word "crucify" or its cognates.
Any questions?﻿

Email ThisBlogThis!Share to TwitterShare to FacebookShare to Pinterest
Labels: Crucifixion, Romulus, The Romans DID NOT CRUCIFY.

These clouds are on FIYAH! 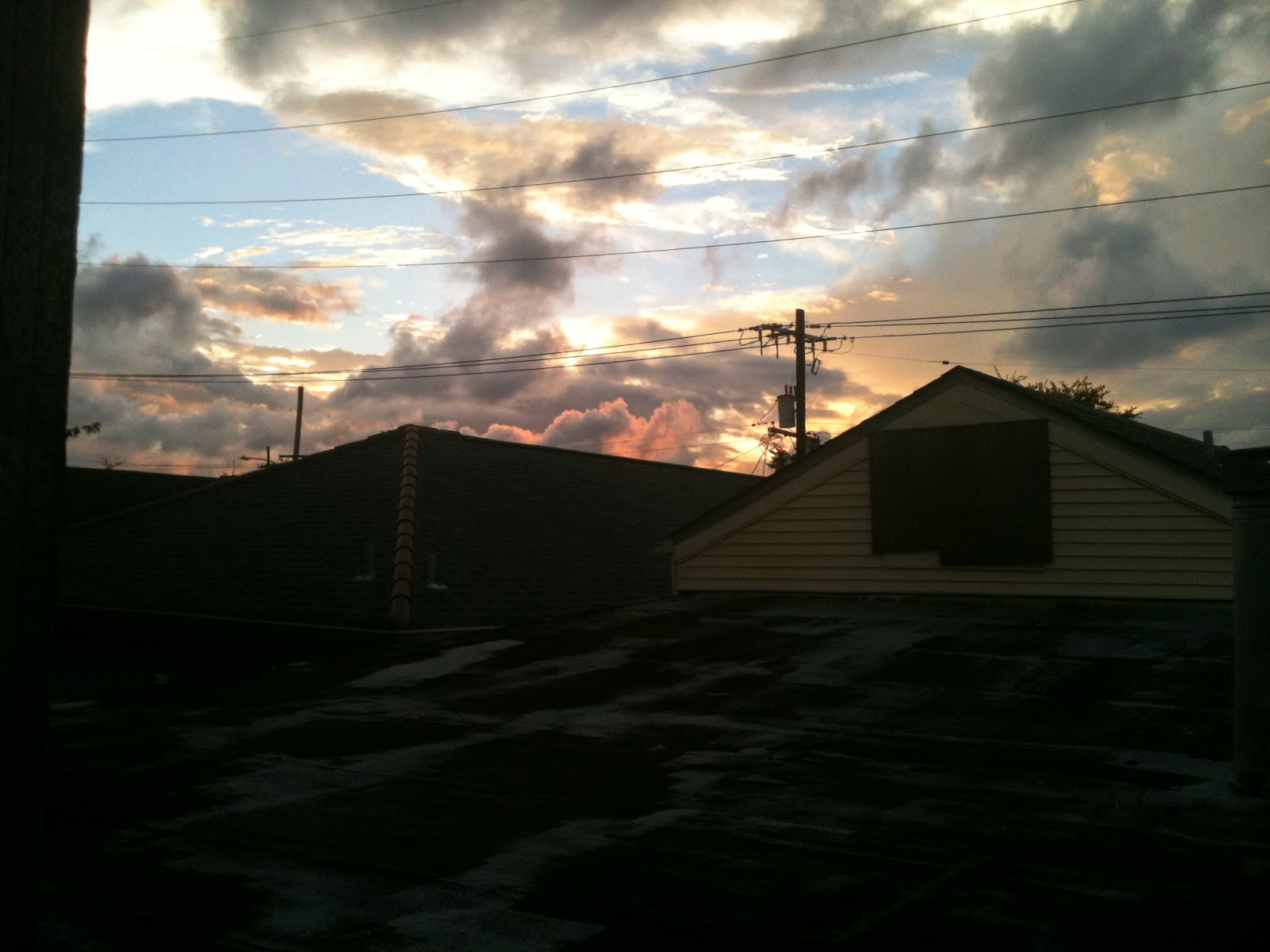 See the clouds, just to the left of the telephone pole and just above the roofline of the houses. Because of the setting sun, they look like they are on fire. For more pics in a slideshow, click on the video below: