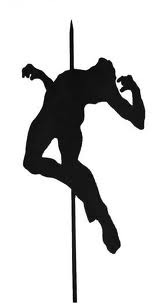 Part 11 of the series: "The Romans NEVER CRUCIFIED the Way We Think They Did!"

Previous in this series:
Part 10 - Humiliations.
Part 9 - Utility Poles and Masts.
Part 8 - Crown of Thorns.
Part 7 - Crucifixion and Priapus.
Part 6 - From Wax Image to Exposed Body.
Part 5 - The First Crucifix.
Part 4 - The Tropaeum and the Furca.
Part 3 - Crux - Modern English Use and Ancient Quotidian Meanings.
Part 2 - Crux.
Part 1.
Previous Series - Crucifixion – The Bodily Support:
Part 4 - Physics of Crucifixion.
Part 3 - Manuscript Evidence.
Part 2 - Archaeological Evidence.
Part 1.
Part 11 - Impalements in Antiquity (1)
A. What Impalement is not.
There is a common idea, probably started by the Jehovah's Witnesses, that impalement meant: to nail to a post, based on the principle of micro-impalement through the extremities with driven nails, possibly from a common understanding of Strong's definition of σταυρόω. [1] The ancients actually differentiated between impalement and nailing to a post (Ctesias, Fragments 3e 688F ib 500; Diodorus Siculus, Library of History 2.18.1, 20.54.7, 25.5.2,) or a cross (Diodorus Siculus, Library of History 20.54.7; Josephus Jewish War 2.14.9.306-8; Plautus Mostellaria 359-61=2.1.12-14, St Augustine, Civitas Dei 19.23). [2]
B. What Impalement is. 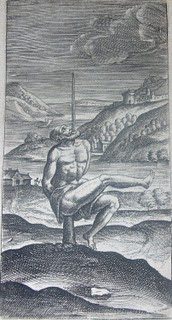 Impalement on an acuta-crux simplex.
Source: Julius Lipsius, De Cruce.
Impalement is the cruel and unusual art of executing or murdering someone by means of torture by driving him through with a wooden stake. [3] The penetration can be through the sides, the back, the front, or the perineum. Now if the executioner or killer wanted to be especially cruel and unusual, he would impale through the alimentary canal: either through the mouth or more frequently through the anus. With women, the vagina / birth canal was another popular choice. Anal impalement likely was inflicted most frequently because, not only was it the cruelest and most humiliating, especially for men, it was also the most efficient (no need to cut someone a new hole). [4]
Impalement usually went by three methods. [3] [4]
At any rate, the pale was sometimes sharp, but usually blunted to increase the cruelty and shame of the punishment. The person would sooner or later slide down on the pole until he is "stretched" on the thickest part of the pale, usually of a diameter that you can barely get your fingers around. And he would survive like that for days, so if a criminal, he would regret what he did.
C. A Case Example. 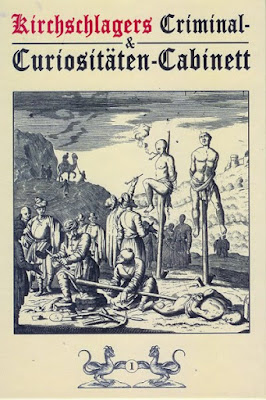 Available at Zeno.org and Amazon.de.
Sorry, it is in German. Sprechen sie Deutsch?
The above German book frontispiece and the following four illustrations were kindly emailed to me from Mr. P. Bahnen of Germany. The illustrations depict a method of impalement by the Ottoman empire in Egypt, witnessed by Monsieur de Thévenot in the late 1600s. 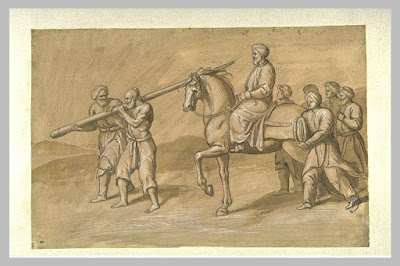 First, the criminal was made to carry his pole to the place of execution. Much like the Roman furcam or patibulum-bearing punishment. 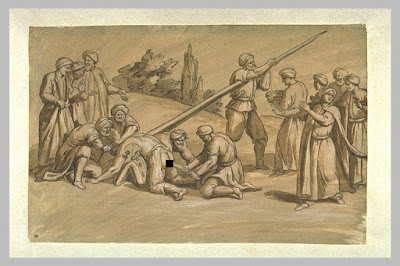 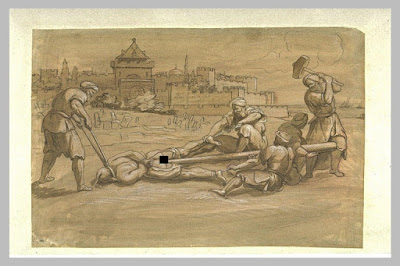 Then they drive the pole into him, sometimes using a sledgehammer as shown here. The Romans called this sort of thing, by the following and other terms: in crucem agere, in cruce figere and even cruci figere. 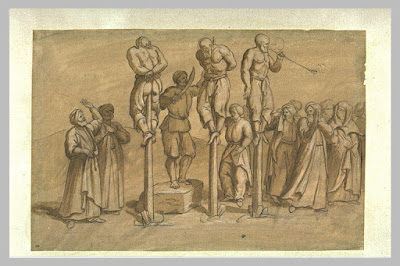 And finally the condemned are raised aloft and allowed to slide down the pole with the assistance of gravity and their own struggles to the point of immobilization.

And here is M. de Thévenot's description of the execution that contemporary Europeans considered to be a combination of the utmost cruelty and "unnatural" sex. [5]

CHAP. LXXIX.
Of Punishments in Use in Ægypt.
The usual Punishments in Ægypt are Beheading, which they dextrously perform: For the Sous-basha finding a Robber, or any one that looks like such, seises him, and making him kneel, one of his Men cuts off his Head at one blow with a Shable, and yet not striking with great force neither; but drawing towards him the Shable, and so using the whole length of it, he never fails at the first blow to sever the Head from the Body. Impaling is also a very ordinary Punishment with them, which is done in this manner. They lay the Malefactor upon his Belly, with his Hands tied behind his Back, then they slit up his Fundament with a Razor, and throw into it a handful of Paste that they have in readiness, which immediately stops the Blood; after that they thrust up into his Body a very long Stake as big as a Mans Arm, sharp at the point and tapered, which they grease a little before; when they have driven it in with a Mallet, till it come out at his Breast, or at his Head or Shoulders, they lift him up, and plant this Stake very streight in the Ground, upon which they leave him so exposed for a day. One day I saw a Man upon the Pale, who was Sentenced to continue-so for three Hours alive, and that he might not die too soon, the Stake was not thrust up far enough to come out at any part of his Body, and they also put a stay or rest upon the Pale, to hinder the weight of his body from making him sink down upon it, or the point of it from piercing him through, which would have presently killed him: In this manner he was left for some Hours, (during which time he spoke) and turning from one side to another, prayed those that passed by to kill him, making a thousand wry Mouths and Faces, because of the pain be suffered when he stirred himself, but after Dinner the Basha sent one to dispatch him; which was easily done, by making the point of the Stake come out at his Breast, and then he was left till next Morning, when he was taken down, because he stunk horridly. Some have lived upon the Pale until the third day, and have in the mean while smoaked Tobacco, when it was given them. This poor wretch carried the Scales and Weights, of those who go about to visit the Weights, to see if they be just, and he had so combined with such as had false Weights, that he brought false ones also with him; so that the Searchers not perceiving the change of their own Weights, thought the other to be just. When Arabs, or such other Robbers are carried to be Empaled, they put them on a Camel, their Hands tied behind their Backs, and with a Knife make great gashes in their naked Arms, thrusting into them Candles of Pitch and Rosin, which they light, to make the stuff run into their Flesh; and yet some of these Rogues go chearfully to Death, glorying (as it were) that they could deserve it, and saying, That if they had not been brave Men, they would not have been so put to death. This is a very common and ordinary Punishment in Ægypt, but in Turkie it is but very rarely put into practice. The Natives of the Country are punished in this manner, but the Turks are strangled in Prison. [6]

Note the differences between punishment for the natives and a lesser punishment for the nationality of the imperialists. Just like in the Macedonian and Roman Empires.
D. Crucifixion or Impalement?
Historical, classical and biblical scholars, particularly those of an Evangelical bent, widely assume that mere crucifixion was frequent and common throughout the ancient world and among those who crucified were the Indians, Assyrians, Scythians, Taurians, Celts, Germani, Brittani, Persians, Phoenicians, Carthaginians, Numidians, Thracians, Judeans, Hellenic peoples of Asia Minor, and of course, the Greeks and the Romans. [7]
Not so! What most of them, plus the Hittites and the Egyptians [4], practiced was some kind of impalement, as would be made obvious by the extant ancient writings. Only of some of them could it be said they "crucified," and even then it was usually the above second method of impalement, with the arms above and the wrists apart. Except we know the Greeks practiced a form of mere crucifixion called ἀποτυμπανισμός and certainly the Romans practiced their then-notorious but now completely misunderstood full-blown crucifixion... on a male cross. But we also know the last two peoples simply impaled people.
The source of this confusion, of course, is Seneca and his description of different torture-devices in his Dialogue 6 (De Consolatione Ad Marciam), which was touched upon in the previous post. And what exacerbated the confusion was the Christians' deliberate or unconscious redefinition of crucifixion to mean: nail to a tropaeum in the manner of the grand exposition of the images of the Emperors starting with Julius Caesar after Constantine first abolished the practice in 337 CE.
E. Footnotes.
[1] Strong's Concordance, Greek Lexicon, #G4717: σταυρόω, stow-ro'-o from 4716; to impale on the cross; figuratively, to extinguish (subdue) passion or selfishness:--crucify.
[2] Nota bene that I have included one of Diodorus Siculus' references twice. This is because when he wrote, the Roman use of their specialty execution pole, i.e., cross (I should say male cross), like all things hideous and shameful, probably already had found its centre and became popular.
[3] Medieval Warfare.info, Medieval Torture, "Pale (Spike for Impalement)."
[4] Gary Corby, A Dead Man Fell From the Sky weblog, "Anal Impalement."
[5] Andrew Wheatcroft, Infidels: A History of the Conflict between Christendom and Islam. 2005, New York City, Random House Trade Paperbacks, p. 260. Google Books Link.
[6] Jean de Thévenot and Archibald Lovell, The Travels of Monsieur De Thevenot Into The Levant: In Three Parts, Volume 1. 1687, London, Printed by H. Clark, p. 259. Google Books Link.
[7] Martin Hengel, tr. John Bowden, Crucifixion. 1977, Philadelphia, Fortress Press, p. 23
Posted by Ed-M at 7:00 PM

Email ThisBlogThis!Share to TwitterShare to FacebookShare to Pinterest
Labels: Crucifixion, Impalement, The Romans DID NOT CRUCIFY.

Impaling through the anus was Chaka the Zulu chief's favourite method. I recall reading some accounts of Zulu witch-hunts in the past, very gory stories, not for the fainthearted

Yes, exactly! I found about the Zulus, too, in Wikipedia and what I read there was all i need to know.

What is being wielded in the second picture?