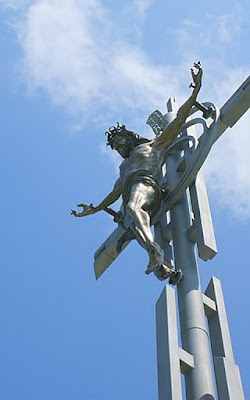 1-5-2013 Additional Information under the series, "The Romans NEVER CRUCIFIED the Way We Think They Did." Text below slightly revised.


The Romans figured out early on that the crucified individual needed vertical support and horizontal restraint at his midsection, as made obvious in modern-day experiments and re-enactments. So what did the Romans do? Instead of providing just a short cantilever with an upright in front of the body, which is all that is needed to provide the necessary support and restraint, they designed the sedile (seat or support) aka cornu (horn) to provide the maximum amount of excruciating pain, degradation, shame and humiliation to the victim. In other words, they designed an impaler, making the cross a kind of erect (aroused) male.


This was the item that gave Seneca cause to in writing rebuke Maecenas (who said he’d rather live at the expense of suffering, even if he had to sit on "the piercing cross," than die) and by implication to call the standard Roman Imperial method of crucifixion, a turpitude of an effeminate secular ritual.  Called a monokeros / rhinoceros horn (unicorn) by Justin Martyr, a point by Iraeneus, a projection / transgression of a seat, a rhinoceros horn, and possibly a stake and a pale by Tertullian and a tree trunk by Pope Innocent III (now how would he know?), this utterly obscene device, projecting or offset on a cantilever from the vertical post, could very well have caused the crucified’s anus to be pierced, penetrated and dilated as deep and wide as can be whenever he needed to sit and rest. Furthermore, there is no indication in either the gospels, anyplace else in the New Testament, or on the Shroud of Turin that indicates that Jesus’ reported crucifixion was anything other than the Roman Empire's standard operating procedure, unless it was some procedure that was equally tortuous and humiliating.


Crucifixion evolved from three different practices that used to be common all over the Mediterranean and the Middle East. The Romans started out under the old Etruscan Kings with the punishment known as “arbor infelix” by which one was suspended by the neck from a Y-shaped yoke with a bar between the arms of the yoke, or by the person’s wrists tied to the arms of the yoke, or from the fork of a dead tree, then scourged til death. The Egyptians, Assyrians, Persians all practiced some form of impalement where the condemned was impaled by a post or pole, either alive or dead. The Behistun Inscription makes it clear that Persians executed people by impaling them. The ancient Israelites had the practice of hanging someone from a tree after he was legally executed, per the Biblical passage of Deuteronomy 21:22-23. This could have been done by impalement. It was the Persians who were first known to practice crucifixion by means of nailing the condemned to a board and then suspending him, which is noted by the Historian Herodotus in the 5th Century BCE (Herodotus 9.120.4). Herodotus commonly used the verbs ἀνασκολοπίζω (anaskolopizô) and ἀνασταυρόω(anastaurow), both of which meant, before the Roman method of crucifixion evolved to its standard form, “to impale.” But when he described a punishment doled out to a Persian Satrap by a Greek general he instead used the term πρός σανίδας προσπασσαλεύσαντες ἀνεκρέμασαν (pros sanidas prospassaleusantes anekremasan), which meant “and there nailed him to boards and suspended him” (9.120.4). From the ancient Egyptians, Assyrians, Persians or unknown others the practice spread rapidly throughout the Mediterranean, with the practice adopted by the Greeks (specifically the Macedonian Empire), the Phoenicians, and the Carthaginians. It is noted that Alexander the Great is said to have suspended 2,000 survivors of his siege of Tyre out on the beach close to the city.


It is from the Carthaginians that the Romans picked up the idea of crucifixion or impalement by means of attaching people to boards and suspending the boards. The Carthaginians were noted for their cruelty and reportedly utilized the practice only too frequently as a form of punishment. There was even a report out of Carthage that a father had his son so suspended! After Hannibal had suspended an Italian Guide for unintentionally misleading him in 217 BCE, the Romans picked up on the practice and executed some 25 slaves in the same manner. And it was the Romans who then “improved” the practice into a ritual or a secular liturgy, that is, a standard operating procedure, that involved first, public nudity, scourging and other tortures, bearing the instrument of execution or a part of it (like a crossarm) through town, nailing to the crossarm, lifting up which induced a racking by gravity, nailing to the main post, exposure to the elements and the public, and provision of a bodily support, all in order to provide the maximum amount of sustained torture in extreme pain, agony, anguish, degradation and utter public humiliation. Outside the ampitheatre where quick deaths and spectacle were popular, crucified persons typically had to suffer for two days or more; in one report (or legend) two such people, a husband and wife who were Christians, allegedly survived for nine days before they perished.

Email ThisBlogThis!Share to TwitterShare to FacebookShare to Pinterest
Labels: Crucifixion

You're quite welcome, Osama El Masry! I wish I had scholars' credentials in this; then I could hold down a university position. But I report what I find and do my best not to distort it. Although lots of times I find ancient writings distorted by mistranslations.

I have more up and Part 2 of The Bodily Support has an update. :^)